Are you growing seedlings for the garden? If so, how do you get your plants ready for planting outside? If you grow plants from seed in your home or greenhouse there is a  transition period before the plants can safely be placed outside.

Hardening off or acclimatizing your plants is necessary for your plants to survive. So lets look at how you can help your plants move from an area of warmth to the colder and more variable temperatures outdoors.

Most plants that are grown as annual flowers or vegetables will survive nights around 10C or 50F. Right now its only April and the night-time temperatures fluctuate. Keep an eye on the weather forecast. Once the nights are consistently 10C  or 50F its safe for your plants to stay outside overnight.

Of course, there are some crops like basil, cucumbers,  zucchini and squash that like it even warmer. I like to wait until the first week of June to place these plants outside.

If you are growing in a heated greenhouse, by April you will have turned the heating system off. The greenhouse holds the heat overnight from the sunlight that came in during the day. The plants are often used to fluctuations in temperature in the greenhouse, unlike the steady warmth of our homes.

Now its time for warm season crops such as tomatoes to be moved to the mini greenhouses. I know, it sounds like a lot of work. It is. It’s also important to know which crops can go outside first which requires some research.

In March I start to move the cool season crops outside to harden off. Cilantro, lettuce, swiss chard, spinach, radishes, mesclun, snapdragon, violas and nasturtiums are cool season plants. They do not perform as well when the temperatures begin to rise. 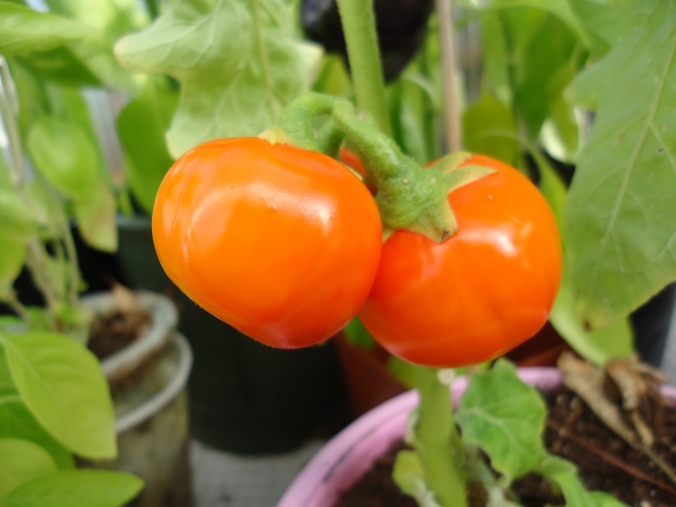 In April I move the warm season crops to the mini greenhouse. Warm season crops – such as tomatoes go out first along with zinnias and marigolds, then cucumbers, cucamelon, squash, zucchini and last but not least, basil will fill the garden. So why tomatoes first? Tomatoes can withstand a cooler night-time temperature than cucumbers and squash.

It really depends on the crops you are growing. My crops listed above are just a small selection.  The mini greenhouses have been a time saver when it comes to acclimatizing the plants. Once in the mini greenhouse everything has adapted well. The mini greenhouse on the right had plastic over it. I had taken it off as the plants didn’t need it any more. Then I saw the cabbage moth flying around which is a serious pest on Brassica plants. Now a floating row cover has been draped over all the plants. Its to protect the kale plants from being found. If you look closely the clear plastic I used is just a paint drop sheet. The old cover for the mini greenhouse deteriorated in the sun’s heat last year. I fasten the new cover with clips to the sides of the shelves and it works fine. Why not order a cover? A cover is almost as costly as a new mini greenhouse. So far this has worked and it only cost a couple of dollars.

So what happens when you move your plants outside without hardening them off? They will show signs of cold exposure.  The leaves will turn white from too much sun or cold. Geranium leaves turn red from the cold. Some plants just sit and sulk. You are no further ahead by planting early. Our garden was planted late in June last year and it thrived. You wouldn’t go sit outside without a coat on in early spring. Why expect it from your plants?  So remember to baby your plants. After all the time it takes to grow them this last step is crucial.

If you are buying seedlings from the garden center, look around to see how they are growing. Are they under a big greenhouse or outside? This will tell you if the plants can go in the garden right away. If in doubt, ask the staff at your garden center.

2 thoughts on “What is Hardening Off Your Plants?”